I would like to think that there are times when people say things without really thinking them through. Perhaps they are having a rough day and not focusing. Or they don't realize that what they have just said could be taken the wrong way...by a hormonal pregnant woman.

Whatever the reason, recently there have been a few occasions where I've laughed off comments that in retrospect were probably a little off colour. Unfortunately, as I am not a great judge of my own sensitivity, I think that it's probably better to smile and nod rather than fly off the handle and start throwing things.

I've made a mental note of some of the keepers to share.

"Wow! Are you having twins?" - From a total stranger.

"Is that good for the baby?" - I was eating chocolate. Maybe not the best thing for the baby, but damn good for mama.

"You're due in February? I thought it was much sooner." - Enough already!

"You must really like that, you're eating a lot!" - The speakers of the other zingers shall remain anonymous, but interestingly this one was said by my darling husband. You would think that he'd know better by now.


You may notice a trend here, most of these comments are directed at what I'm eating or my size.

Yes, The Bean and I are growing steadily. In fact, it feels like we're expanding as each day goes by. I've had to hang up my last pair of pre-pregnancy pants and just realized that although I am currently able to zip up my winter coat, in a few weeks that will not be the case.

For the first six months I was so careful about everything that passed my lips but recently it's becoming harder and harder. Especially when everything I am about to eat demands to be covered in peanut butter beforehand.

Next week we have an appointment with our baby doc. I greatly fear that this will be the time when I am berated for gaining too much weight. Guess I had better start cutting back on the peanut butter. 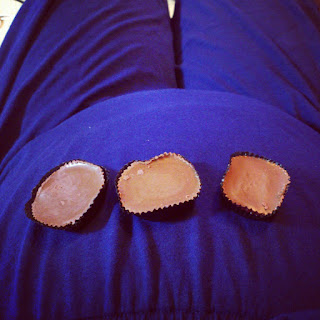 But first I should finish off these tasty treats.

Posted by Brandon, Shin and The Bean at 6:45 AM

Brandon, Shin and The Bean
We have decided to start a blog so that we can share our pregnancy and baby moments with our families and close friends. Due date: February 17th, 2013.