The company was fabulous.

The food was scrumptious.

The gifts were meaningful.

And the games were educational.

Yesterday was my baby shower, and it was perfect.

Baby showers are not traditionally done in Japan. Not unless you have a wonderful friend willing to host one for you. From the day that I told her I was pregnant, The Sugar Fairy has been talking baby shower. Back in December we finally managed to pin down a date and then the rest was up to her.

I have a small group of fabulous girlfriends, which is unfortunately getting smaller by the year, that were of course on the invite list and I thought it would be nice to have my in-laws (sister, mother and niece) join in the fun as well. 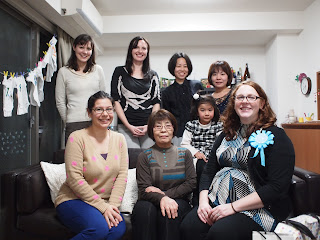 The afternoon started off with scrumptious food supplied by The Sugar Fairy. To my surprise, all of my pregnancy cravings were present, including peanut butter & banana finger sandwiches and fried chicken with maple syrup for dipping. 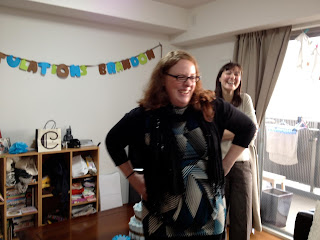 One of the many amazing things about eating at The Fairy's house, is that she makes EVERYTHING from scratch, even peppermint patties. 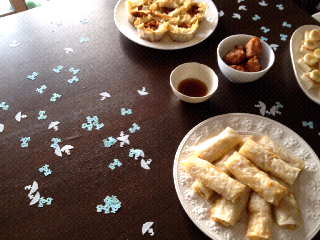 While relaxing with our goodies I took some time to take in the new baby-chic decor at The Fairy's house. The Lady Donna and Lady Jane were put in charge of jazzing up the place for the party. A congratulations banner just pour moi, a clothesline of onsies hanging in the sun. and the pièce de résistance a triple-layer diaper cake with matching "Mum to Be" badge. Loved the boyish, yet sophisticated colour palette! 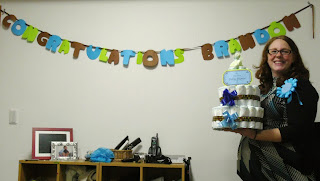 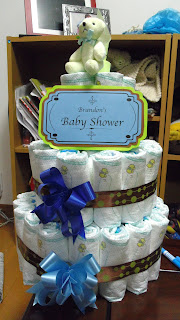 Perfect!
﻿
Next up was the opening of cards with messages and Labour Beads from friends near and far. I'm going to skip over the beads for now (and let your filthy minds stew for a couple of days) and keep on truckin' over to the onsies hanging in the sun.

A little over two and a half years ago we held a baby shower for a friend of ours from England at which we decorated onsies for her little one. A fun and meaningful little enterprise brought back for my shower with a twist.

Twelve months in a year and twelve onsies for the Bean to model. Each of us selected a month from his first year and not only decorated the shirt but wrote a personal message to be opened at the time of wearing. The eight of us at the shower selected from the months that had not already been taken by friends that either couldn't make it due to previous engagements, or distance. You'll have to agree that England and Australia are just a tad far to be traveling just for a baby shower, but thank you ladies for your fabulous shirts and wishes! 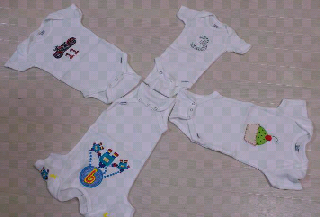 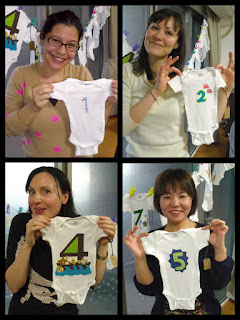 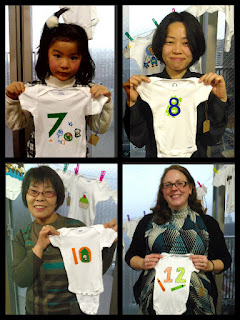 ﻿Twelve months of cute.
Perfect!
On top of Labour Beads, one-of-a-kind onsies and a year of secret messages there were presents galore spoiling the Bean and myself.
By the time the shirts were back on the line, presents had been opened, and The Fairy's AMAZING chocolate cake with salted caramel icing was devoured, it was already dark. We bade farewell to a couple of guests and the games began!
As previously mentioned, my circle of friends is shrinking as the years go on. But that didn't stop the fabulous Mrs. Price, currently tucked away in Stratford-upon-Avon, from putting her stamp on the shower-tastic day.
We started off with a very educational quiz (amazingly translated by The Fairy). I learned that in 2012 the top name for boys in Canada was Carter and in Japan it was Hiroto (luckily we didn't select either of those for the Bean). I learned that there is a baby born somewhere in the world every three seconds. I learned that nine million babies will be born on the Bean's due date. AND I learned that babies go through an average of 8 to 12 diapers per day...guess we should think about buying a package or two. That diaper cake isn't going to last very long!
After that we settled in for a bit of silliness involving modeling clay. The timer was set for three minutes and the lovely shower-ettes were given the challenge of creating a likeness of the Bean. 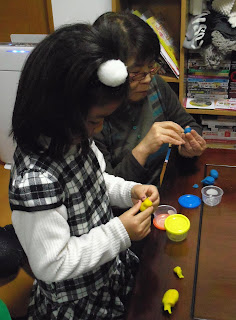 First place went to The Fairy with the pink baby. I liked that he had ears and an 'outie' belly button. Runner up was the Lady Jane with the purple baby - the only person that thought to give the Bean genitalia.
PERFECT!
Thank you ladies from the Bean, Shin and I - you all really outdid yourselves! ﻿

Posted by Brandon, Shin and The Bean at 4:23 AM

Brandon, Shin and The Bean
We have decided to start a blog so that we can share our pregnancy and baby moments with our families and close friends. Due date: February 17th, 2013.